Pear on a Blue and White Plate 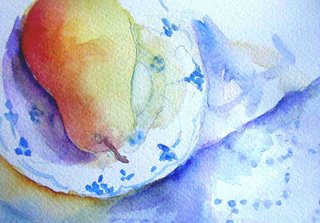 Back a couple of posts, I showed a photograph of this pear, and told of my intentions to paint it and the linens it was on. As you can see, the linens took second or third place when it got right down to it. I was really taken by the colors of the pear itself and really liked the reflections cast by the pear onto the plate. So I spent most of my painting energy trying to get the rich colors of the pear, and then working on those reflection on the plate. I love the pattern in the plate, but wanted to show it as simply as possible. By this time it was all about the pear, and the linens fell by the wayside.

Last week when I went to the grocery store, they had a large bin of beautiful red pears. They had gorgeous gold undertones, and now, as I remember them, they were a bronzy red that looked as if they were glowing from within. You know, actually, I think that isn't true. Our produce department does not have wonderful lighting, and unless they really were glowing from within, which I realize wasn't really the case, they were probably just pretty pears. I have made them so beautiful in my mind, that I really don't want to go back and see just plain old pears there. I'll stay away from the pears for a couple of weeks. It would just be too disappointing.
Posted by Catherine at 1:34 PM

The colors in your pear are wonderful, full of light and life! The plate and linens are just there to show off the pear, so don't be so hard about how much attention you gave them, it's a lovely painting!

This is really just perfect -- I like the way the pear stands out in the painting and wouldn't change a thing. Fabulous use of color and brushwork.