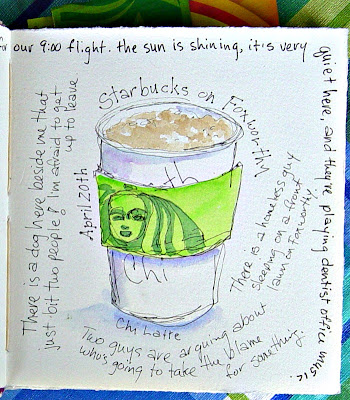 A Chi Latte and Other Crazy Stuff
From San Jose, California -
To those of you back at home  -  I may just stay here.  I think I like this life.  This kind of stuff just doesn't happen at home in Northern Michigan  -  not all within a few minutes anyway.

I mean, how many times, at home, have I been sitting on the corner, drinking a chi latte at Starbucks (NEVER) and had a dog sitting next to me actually BITE two people?  It bit the Starbucks guy on the hand, and then when the mail man walked through, it bit him on the leg.  I was afraid to get up to leave  -  I let the dog leave first.

Two guys a couple of tables over were arguing about who was going to take the blame for something.  The louder one, naturally, had nothing to hide and the other one would have to take the blame.  The dog didn't pay any attention to them.

The homeless guy I saw wandering around the neighborhood was curled up on a beautifully manicured front lawn, right at the edge of the sidewalk. Sleeping?

And . . . there is bird banging his head against the living room window for days on end now.

Ya can't make this stuff up.
Posted by Catherine at 8:28 PM 9 comments: