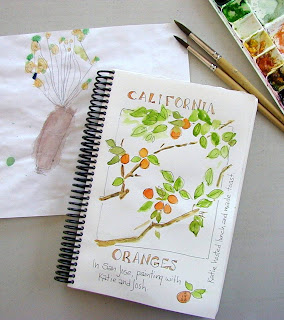 California Oranges
We had a wonderful week in California with the kids. I only did a few little journal paintings - it was cold, dark, and raining the whole time. We still had a fabulous time. We painted pictures of the orange trees in the backyard, we walked to and from school, we ate a lot of peanut butter sandwiches. . .

The painting on the left was done by our youngest grandson - he's five. He wanted me to have the original and cut it down to fit in my journal. I'll put it on the facing page next to my oranges.

The travel was some kind of nightmare. It took us TWO days to get home! We spent most of those two days in Chicago O'Hare. They did put us up at the Radisson for the night. The bed was a Sleep Number bed, which I thought was pretty luxurious and pretty weird at the same time. I think it is hard enough to sleep away from home without having a bed that would take a couple of weeks to get used to. The fabulous down comforter was TOO hot - so it was the sheet (too cold) or the comforter. Maybe I just don't do well with luxury. I didn't sleep - maybe it was the sleep number or maybe it was the fact that we were scheduled to go on the next morning from Chicago, fly OVER our destination of Grand Rapids to Detroit, where big snow storms were predicted, and BACK to Grand Rapids. I could see this Detroit layover turning into a third day! Fortunately when we arrived at the airport the next morning we were able to get a direct flight to Grand Rapids. It still took most of the day to get out of there, but hey, we made it, and eventually so did our luggage. And I am sure missing California and the kids!

So. Okay. Back to real life. My classes started today. We worked on a still life with mostly earth colors and a blue and white pot thrown in. They did a great job of fitting it all together - earth tone shadows on the blue and white pot, and blue tones in the shadows of the warmer colored objects.