Basil, Ginger, and a White Bird 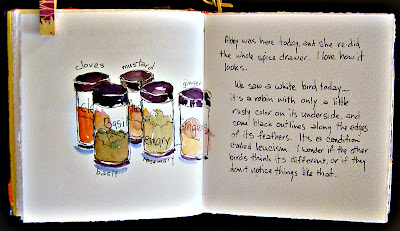 Project of the Day
Middle Granddaughter has been going to spiff up my herbs and spices for awhile now.  Yesterday she was off school, so that was the project of the day.  I love how they look  -   all the bottles are alike and the colors are so warm and earthy.  Nice.

There was a white bird flitting around the neighborhood yesterday and today.  It isn't unusual to see sea gulls here, but this had us stumped.  It had some black on the tips of its wings and a little rusty color on its underside. When it came close, it was obvious that it's a robin.  Of course I googled it and found pictures of robins that looked just like it.  Apparently it has a condition called leucism.  That means it is missing some pigment in some feathers.  It's not an albino.  So  -  there is my science lesson of the day.  If you aren't completely bored to death yet, and would like to know more and see a picture of a leucistic American robin, here you go.

For some reason, I keep thinking "the white bird flies at midnight".  Is that from a movie  or something  -  I can see someone like Peter Sellers or Leslie Nielsen saying it. Where did I get that?

The racoons were looking in the bedroom window in the wee hours of the morning.  I wish they wouldn't do that.
Posted by Catherine at 5:28 PM

How wonderful that your spices are now so nicely re-done!

Thanks for the info about the robin - I learned a new thing today! Now if I ever see one, it won't drive me nuts trying to figure it out.

Love your spicy painting! That robin is really beautiful and interesting...I had never heard of that before.

trinity8419 - you're very welcome - you never know when you might run into a leucistic robin.

Jane - thanks! I guess the patterns of color on the birds can be very random, but that picture looks very much like "ours".

I love the science lesson! How interesting--I'll be on the "look-out" for one of these.
The Spice Jars look wonderful...
I like that Jane called it a Spicy Painting :-)

Marj - you can't miss a white robin if it's around. They are very visible - but rare.

Yes - I liked Jane's comment on the "spicy painting" too : )

I absolutely love your blog and your art. I'm in a moving situation right now but as soon as I get set up in California I will order your book. My daughter is an artist, just coming into her own and I have a tremendous respect for the beauty that some people can create with their hands, their gift , talent, and a few materials. You, as a visual artist immortalize the culture, the times, and make it possible for future generations to look back and appreciate the best of what we have. That is why we love the ancient paintings done in dark caverns as well as all the art that can be admired in museums, in books and in our friend's houses. Thank you

Manuela - thank you! A very profound thought on what we, as artists, leave behind. I hadn't thought of it that way, but every little thing we do leaves a statement of our time and place. Interesting.