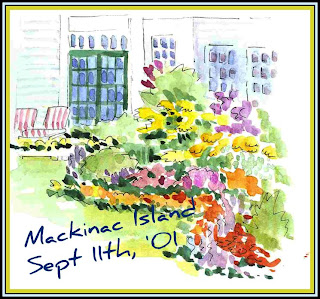 The View From my Window - a bit of sunshine and color.
On Sept. 11th, 2001 I was teaching a five-day watercolor workshop on Mackinac Island. It was a Central Michigan University Eldehostel Workshop, and the participants were from all over the country. If you are familiar at all with Mackinac Island, you know what a magical place it is, which made it a very strange place to be during that week. To be in a magical place when the magic is gone is very disconcerting. It felt lonely - I couldn't go home and I wasn't with my family. We had to carry on - this week was vacation for the participants. They had paid to be there and to have fun and learn something. No one's heart was in it. It was flat.

Between classes I tried going around painting journal pages, but most of those were flat too. I was near the door of the hotel painting a gate, but not really concentrating on it, and a group of hotel interns was gathering there. They were from European countries and were due to go home in three weeks. They were very worried now about being able to get home. All I had to do was catch the ferry in a few days. They were in a foreign country that had just been attacked and they would have to FLY to get home. Not a great option at that point.

I am meeting a woman for lunch today that was the coordinator of the workshop. She stays here for the summer and will be returning home soon, so we'll get together, remember our week on the island a little, then move on to what's new in our lives and what plans we have for the year.
We'll all remember where we were that day, won't we?
Posted by Catherine at 8:25 AM

Hello, Catherine!
I have sat here for probably 45 minutes this morning, sipping my morning java....and reading your beautiful blog! What a treat it has been. I am captivated by your watercolor painting and wishing that I lived in your area so that I could attend your classes. This is how I long to paint one day- you paint of pretty things, simple things, life things...your journal paintings really captured my attention because I too, keep art journals! I am going to look for your book this weekend! I will be reading your blog! Thank you for the morning inspiration! ~Missy