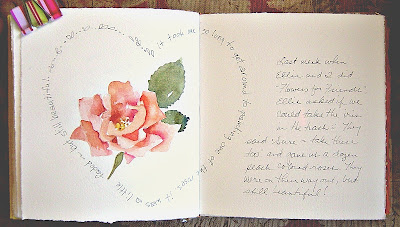 A Peach Colored Rose
and a squirrel story
I finally got around to painting one of the roses.  It was fun, and I'm pleased with the way it turned out.  I may have done the whole bunch, but I was a little (a lot) distracted by the squirrel in the attic. I had recently watched an episode of the Hoarders in which a homeless person was living in the hoarders' stuff, and they didn't even know it.  I swear that squirrel was moving things around up there.  He found his way from the attic down to the enclosed back porch (several times) and sat in the rafters or right on the window sill and watched me in the kitchen.  I went out the front door and went around the house to open the porch doors.  His friends were frantic  -  they were hanging on the house here and there and weren't afraid of me at all.  I must admit, I was afraid of them!

I determined from the looks of HIM (?) that he wasn't pregnant or nursing, so we were not dealing with a nest.  This was an accidental break-in, so why wouldn't he just walk out one of the open doors???!!! He obviously didn't want to be here, and his friends didn't want him in here either, so just leave already.  I was hoping that he was going to go out, and his friends weren't going to come in  -  I don't know how squirrels reason.

When my husband came home, he lowered the attic steps (they come down into the back porch) to make it easier for the squirrel to come down and go out the back door!!!   I was in stitches  -  that was the funniest (most ridiculous?)  thing I had ever heard of.  I guess not so ridiculous after all  -  the squirrel left then. Not exactly down the stairs, but it obviously encouraged him to get the heck out of there.

It was pretty quiet when he left.  A nice kind of quiet.


HAPPY VALENTINES DAY!
Posted by Catherine at 9:53 AM

Oh my gosh I thought I was the only one with such a crazy squirrel story, I lauhered when I read this,, (sorry),, lol.

I was house sitting for friends of ours that live down the shore from us and black squirrels got in, i tried for days to get them out and as a last ditch effort i left a trail of peanuts , shelled, (unsalted) all the way out the door that worked!!!
I was a bit scared of them as well, your rose is beautiful, I have spent many hours painting roses, they were a challenge for me,, (I like to conquer my challenges)!!!!Beautiful rose,, you are so very talented,

Your rose is beautiful. You captured it's beauty perfectly! Thanks for sharing it...and Happy Valentine's Day! BJR

...And you painted it beautifully!
Happy Valentines to you and Cliff, too!

I love the way you did the text around the flower.

Great rose! And I love your winter painting on your home page.

I love your rose. It is perfect for Valentine's Day. You inspired me to try to paint one of mine. I laughed out loud when reading your squirrel in the attic story. I have a skunk in the basement story. It took me a while to let go and laugh at that skunk.
I was wondering what size did you make your new journal. It looks square.

Laurie - the trail of peanuts is a great idea. Our squirrel was apparently more frantic than hungry because he never toughed the bags of bird seed. Of course, sooner or later, he would have. I will remember the peanuts for next time.

I am not a rose painter - but this was fun. I may do some more. Thank you for the kind words.

BJR - Thank you! Hope you had a nice Valentines day.

Marj - Thank you! A belated happy Valentines Day to you and your Cliff.

Oma - thanks Elizabeth. It just needed a little something.

Mary Lou - Thanks. The winter painting is a view out of my classroom window.

Anonymous - thanks! A skunk in the basement! I think it would take me awhile to think that was funny too.

The sketchbook is 6 X 5.5 That is the paper size - the cover is just a bit larger. That size makes it possible to fold and tear a 22 X 30 inch piece of watercolor paper without waste.

reeEvery time I tried to move out the keyboard from beneath the computer to write to you, my cat-in-my-lap pushed it back under. I had to send him away. I love the squirrel story.
And the rose is lovely. You've found a way to show the translucent petals-- that is what I am still learning to do. I am going to study yours...

Annie - My cat is draped across my shoulders as I write this - sweet, but a little too clingy tonight. I'm glad you like the rose - thanks. I am not a rose painter, but it was fun.