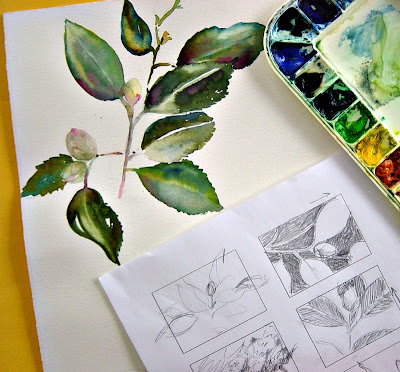 Camellia Leaves
In class this week, we were doing thumbnail sketches, trying to pick up on what it is that attracts us to a subject.  I think we paint a subject  -  object or scene  -  not just for the subject itself, but because of something ABOUT the subject that attracts us.   It might be the shape, or the colors, or the way the light falls on it, or any number of reasons.  We have to recognize the reason and build on it.
When I said it was the color of the camellia leaves that attracted me,  the class wanted to see how I would get that very dark, shiny green.  We experimented with a few different applications, such as mixing on the palette, mixing on the paper, a combination of  mixing on the paper and on the palette.  We tried different techniques for the highlights  -  lifting while the paint was still wet and painting around the highlight area, leaving the white of the paper.
Now I think I'll go play around a bit with some more thumbnail sketches.  I am intrigued by the very flat, horizontal bottom of an azalea plant I have.  I don't care for the color, and I'm not crazy about the floofy blossoms, but I really like the shape.  I had better get to it before Rudy the cat changes the shape of it.  Yesterday he ingested some of the leaves, and they seemed to give him super powers. He managed to open the basement door and almost opened the back doors into the garden (snow).  That's not possible for him without the use of the "azalea drug".  I googled it and it said it was mildly toxic and might make cats a little lethargic.  Rudy has re-written the book on all toxic plant ingestion. Yes, I put the plant where he can't get to it.  He's sleeping it off today.  He sleeps something off everyday.  How do you know when a cat is lethargic?
Posted by Catherine at 12:16 PM

thats a very good question how dod you know?
Beautiful leaves, i love the color, the dark blue ishy green, ( how techy I am).
I smile evrytime i come here, its your books that taught me to paint, I thankyou for that.

Interesting post--I think you are on to something regarding figuring out what attracts one to a particular subject and then building on it. That becomes an element in the artist's style. Your thumbnails are really intriguing.

You always make my morning, Catherine...Rudy rewriting the book on toxic plants and sleeping something off every day--and how DO we know when a cat is lethargic? so true about cats and my kitten who is now almost grown.

What a wonderful shine you have got on those leaves. I must study them some more. Getting a shine or a light through them and petals for that translucent look --I am still trying to learn how to get those effects.
annie

Your leaves inspire me! I have looked and looked at them... amazed! Maybe I'll get out my art supplies and see what I can do! Your so right abour subject matter. I only draw something when it "speaks" to me. Then I have a connection to it.
BJR

Lovely sketch of the leaves, and fascinating tales of your cat.

Love how you "found" all these colors, it inspires me to go out an snip off a branch from my bush....e

Lauri - thanks! I'm glad I could be a bit of an inspiration.

Janene - I really need to keep in mind what has attracted me or I "wander". You're right about that becoming an element of our style - I hadn't thought of that, but it would have a lot to do with shape, direction, color temperature etc. Interesting thought.

Annie - Cats can be quite entertaining, can't they? I really didn't get that until Rudy came into our life.

I really can't get the hang of light shining through a leaf or petal, but we all need something to strive for, don't we?

BJR - thanks! I always tell my students to paint things they know. You're right - it sure helps to have the subject speak to you.

Claire - thanks! Rudy keeps us laughing here, but he has scared us a few times when he eats toxic parts of my class still lifes.

Oma/elizabeth - do you have a camellia bush? We can't grow them here. I love their shiny leaves and the subtle color changes of the flower buds.

Catherine, your camelia leaves are gorgeous! love the colors! beautiful. We have a Rudy kitty too. Ours is 16. Love your Rudy story :),take care,Diana

Hi there, I discovered your blog when I followed the camellia leaves on this post from Pinterest. I've been back to admire it several times... I don't often notice such depth in watercolor. I don't have much experience with it, so technically I have no idea what you did. It looks like you sneaked in some colors that don't even seem like they should work within the leaves, and the result is impossibly perfect. Point me toward your published works, please!

Hi Sandy - welcome to my blog. I often let the colors mix on the paper. I have less control, but the results, I think, are much more interesting. I would use blue, yellow, and a little red to mix a dark green, so I just let those colors mingle. I do have a book, "A Petoskey Watercolor Journal", that is available on Amazon. It has tips and simple painting instruction.