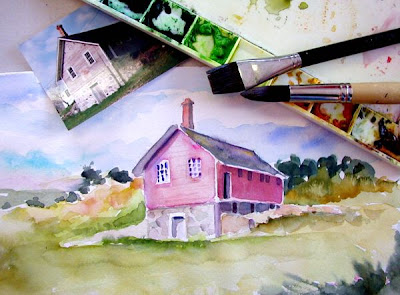 This was a quick little demo painted with a large brush.
This demonstration in class today was to show color mixing on the paper, mixing blacks, or near blacks, and laying the shapes in without getting fussy.

We only have one more official week of class, but I am tacking on an extra because we had so many interruptions in the eight weeks of this session. We made up the missed classes, but I don't feel there was as much continuity as I would have liked. I will be starting the next eight week session on February 18th and 19th. I will post more about it in a couple of days.

Several of the people in Wednesday's class are interested in doing figures, simple portraits, and working on skin tones. That'll be fun!

I picked up some ingredients for a recipe that looked good to me - a pasta dish with feta cheese, roasted red pepper . . . OOPs - it's done in a food processor. I don't have one. Hmmm. I let you know how this goes.
Posted by Catherine at 4:09 PM

Love this little barn! Do you ever do weekend workshops? Western Washington would be a little far to commute from for an ongoing class.....did your recipe work out?---Carol C.

Carol, Thanks. Yes - Western Washington would be a TRIP from northern Michigan, but I hear it is beautiful there!
Yes - the focaccia pizza was great.