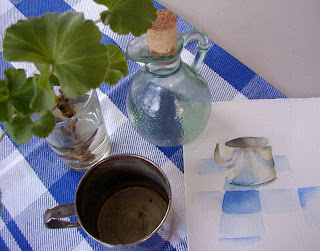 This is a very small watercolor of a tarnished silver cup on a checkered tea towel. We were doing small studies of reflective surfaces. I was going to polish the cup before class, but I really liked the warm reflection it had, with almost a rust color along the rim. The biggest challenge with the cup was to get the checks from the tea towel to look like a reflection instead of a pattern on the cup.

We never did get to the blue-green cruet with the pebbly surface. Maybe next time.

We have quite a bit of new, fresh snow. The kind that would have been so pretty back about December 15th. It's really not bad - it's fresh and clean, and today there was a little sun now and then. The Bay was beautiful. We have a long way to go with winter weather, but at least the days are getting longer. Tomorrow's class is going to be working from photographs. They aren't as much fun as the real thing, but they're great for editing and working out composition problems. And, we'll be a lot warmer.
Posted by Catherine at 9:50 PM

This is a lovely result, Catherine with the reflections from the blue tablecloth and you have really captured the slightly tarnished surface. I've been wanting to try some silver sugar coated almonds - you've inspired me.
And many thanks for visiting and your kind comment on my blog. I'll certainly be visiting you again.

Thanks Robyn.
Mmmmmm - silver sugar coated almonds. I'm going to be watching your blog to see what you do with those.