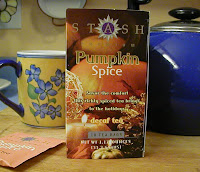 I know this is going to sound like a commercial or an endorsement, but I am absolutely addicted to this stuff. First of all I HAD to buy it because the box is beautiful (yes, I judge everything by the way it looks). It did sound a little too - oh - seasonal, and what's the big deal about pumpkin pie spices ( I can do that myself) and how different could it be from chi tea. Just sniffing the bag when I open the packet sends me somewhere - well, I hate to say it, but I think it's Chicago. Anyway, it has an exotic (Chicago???), sharp fragrance that really hits you, and then there are undertones of comforting familiar spices. However, I am a little suspicious of of anything that could possibly come from China. Especially something we ingest. I had a colander in my shopping cart and put it back on the shelf when I saw the "made in China" label - that was going to touch our food!

Speaking of fragrance, I just bought the most horrible wine in the world. La Francesca. I won't even admit how cheap it was, but it was in the bargain bin and I have found some decent wine there. Actually I wasn't sure I knew good wine from bad, but now I do. It smells just like the feed store. I AM NOT KIDDING. Just a warning.

And, Ginny, thanks for your comment on my last post. Al was my father's "cousin-in-law", and he and my dad were in a boating accident. My dad survived, but Al didn't, and his body wasn't found for several months. Having grown up with the story of this tragedy, I really do think he deserved top billing, ahead of the roaster!!!
Posted by Catherine at 9:06 PM

Now I'm being forced to find that tea here (down State). It's probably available at Trader Joe's.
Sounds warming and yummy--maybe I'll even try to sketch the box!
:-) Marj. M.

I have already started the hunt, three stores this afternoon, nothing...Now it has become an obsession, I thank you for that Catherine 8~))I love pumpkin everything. I am doing the same thing with objects and food from China. It does cause one to think...

Trader Joe's only had "Lemon-Ginger" and the box wasn't as pretty as the Pumpkin Spice...so much for sketching the box. I'll try the paint tube. Have a great time squeezing in all the event of Christmas--Enjoy! Marj. :-)